If you have ever been to Catalonia, you have noticed that Catalan is used surprisingly often in road signs, bus routes, station names and much more. It’s no secret that people in Catalonia are proud of their heritage and their language. So, here are some words and expressions exclusive to the Catalan language from all over Catalonia and more that will help you fit right in!

The term Bikini (also known as a tosti in some other countries) describes a hot ham & cheese sandwich in Catalonia. However, not everyone is aware of the reason behind the iconic Bikini sandwich’s name. Back in 1953, a dancing hall called 'La Sala Bikini' with a terrace opened on Avenida Diagonal. This dancing hall offered a sandwich that instantly became a hit. The ham & cheese sandwich combination became increasingly popular and extended beyond the walls of the original dancing hall. People would go out to random bars and restaurants in Barcelona and ask for the sandwich they make at 'Bikini'. Eventually, everyone started to call it the bikini sandwich. 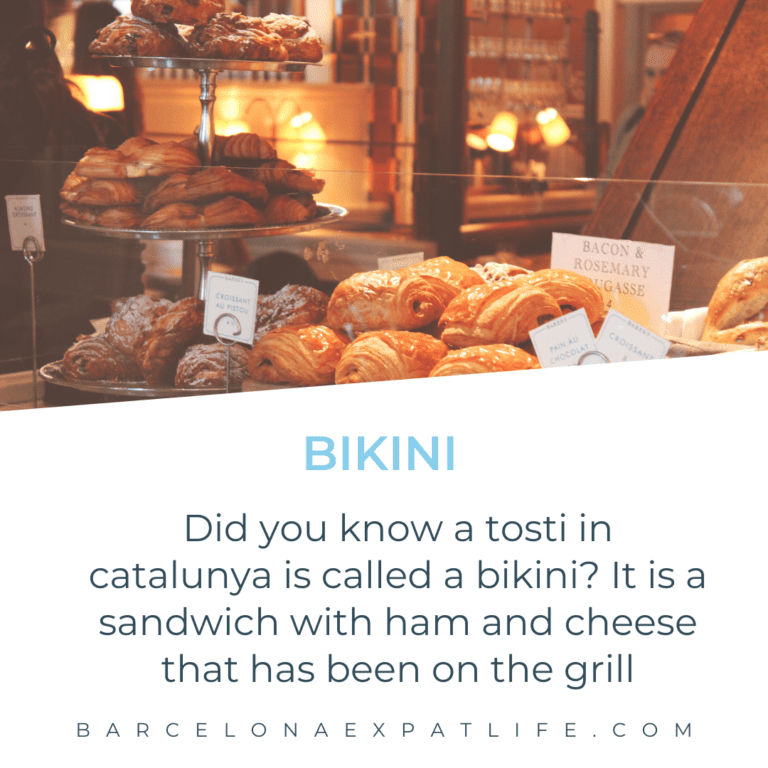 Pa amb Tomàquet is part of the holy grail of Catalan gastronomy. It’s probably the most cherished dish by the Catalan people and the others who try it. Pa amb Tomàquet is a very simple dish that consists of a slice of glass bread with garlic and tomato rubbed over it. To finish it off, it’s topped with olive oil. This simple yet amazing dish is a go-to for many Catalan people. 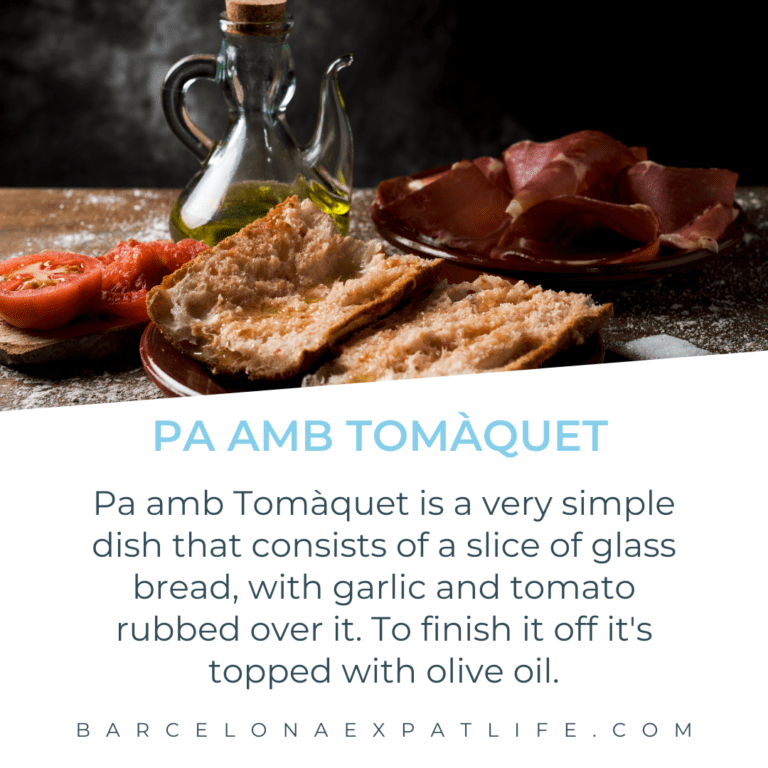 Something that very few people know about is that the Catalan language has a lot of dialects. The most distinguished ones are Mallorquí from the Balearic Islands and Valencian. A very common Mallorcan word is 'pamboli.' This common dish in the Balearic Islands consists of bread and olive oil, and is often accompanied by some Iberian ham. On the Valencian side, we have a word that is known around the world: Paella. Most people don't know that this word originates from Valencian Catalan. Though it is now commonly known as a traditional Spanish dish, Paella originates from Valencia and inherits its name from the Latin word patella (meaning frying pan). 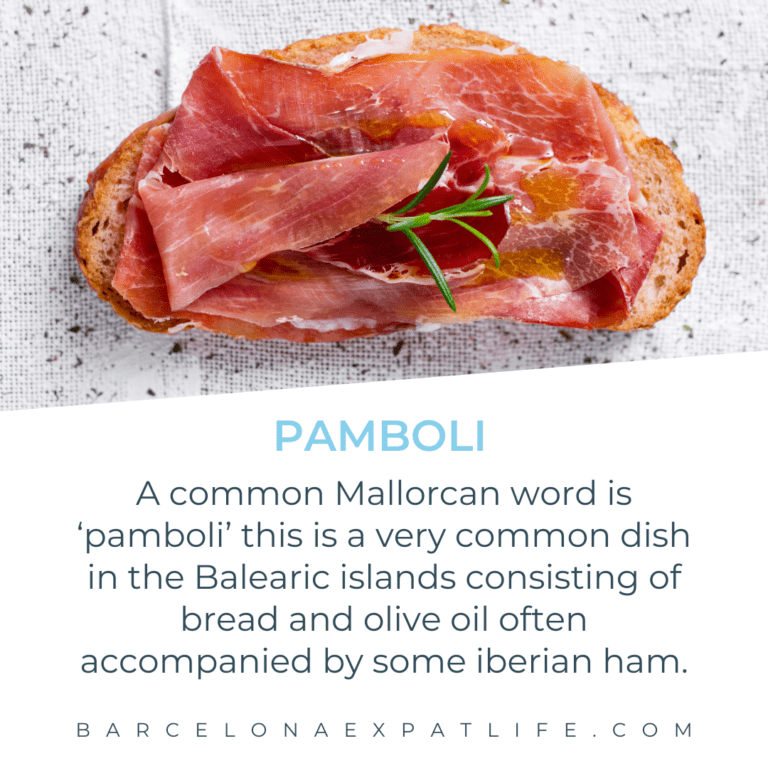 A lot of Catalan expressions translate directly in English. A very common expression here is 'com més serem, més riurem.' This translates into the very renowned English expression: ‘the more, the merrier.’ This commonly used and lighthearted expression displays the hospitality of most Catalans. Another expression that has the same meaning as its English counterpart is 'tal faràs, tal trobaràs'. This roughly translates to 'What goes around comes around.' This saying, which is used in similar ways between the Catalan and the English, means that one’s actions eventually have consequences. Lastly, the expression 'qui no s’arrisca, no pisca', can be translated as 'nothing ventured, nothing gained.' More commonly known as 'no risk no reward,' this expression means that there is no reward if you don't take risks every once in a while. 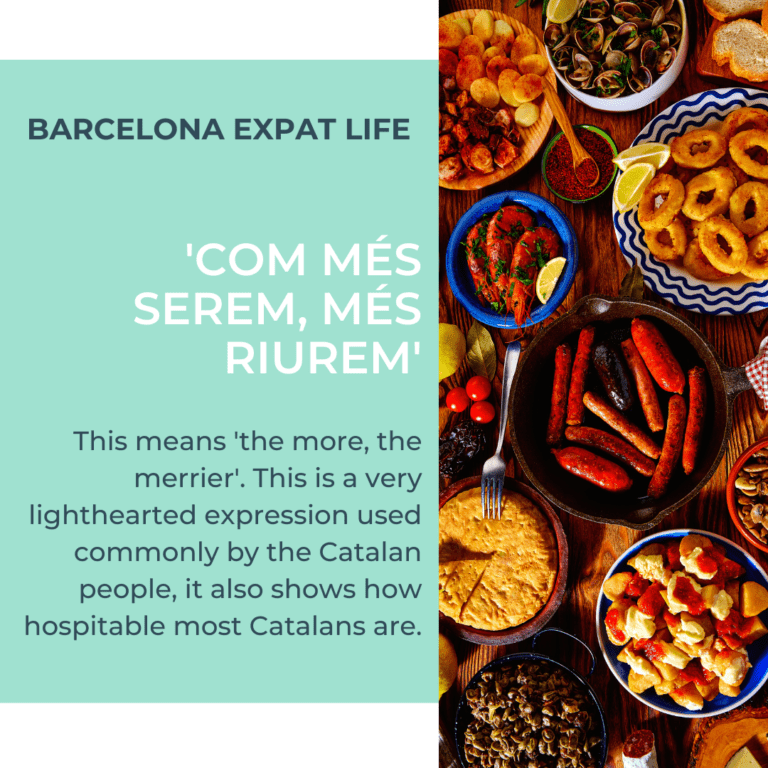 Some expressions stem from Spanish but are given their own twist in Catalan. The first example of an expression like this is 'si vols estar ben servit, fes te tu mateix el llit.' The direct translation in English is 'if you want to be served well, make your own bed.' Its Spanish counterpart is 'si quieres ser bien servido, sirvete tu mismo.' Unlike Spanish expressions, Catalan expressions make more use of figurative speech. The Catalan expression 'qui de jove no treballa, de vell dorm a la palla' translates in English as 'one who doesn’t work when young sleeps on the hay when old.' Another Spanish expression is 'el que de muchacho no trota, de mayor tiene que galopar.' In English, this means 'one who doesn’t trot when young has to gallop when older.' Though both translations of this expression use figurative language, the Catalan version has its own twist that fits right into Catalan culture. Catalonia is historically farmland – this detail is a great source of pride for the Catalan people. The Catalan anthem is even titled 'els segardors' meaning ‘the reaper.’ This makes a lot of Catalan expressions unique. Many Catalonian cultural details build on the creative figurative language. 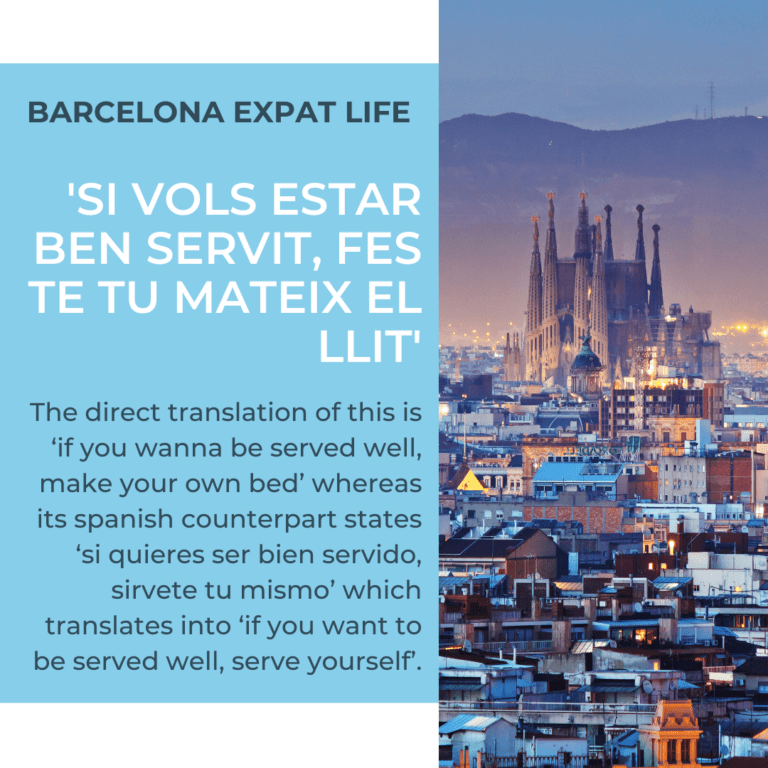 There are also expressions that are unique to Catalonia and its language. One of these expressions is 'qui no te feina el gat pentina.' This literally translates to ' one who doesn’t have work brushes the cat'. This means that someone who doesn't have anything to do will do anything to entertain themselves. Like most Catalan expressions, this is very peculiar; there isn't really a correlation between brushing a cat and not having work. However, this peculiarity is what makes Catalan expressions unique. Another example is 'hi han més dies que llonganises.' In English, this means 'there are more days than sausages.' Catalonia is famous for numerous things, including the 'fuet' sausage. So, it's no wonder that the Catalans managed to come up with an expression involving their famous sausage. This expression signifies that there is always time and there’s no reason to be in a hurry. Finally, there is a Catalan expression dedicated to the Catalan people. The expression 'els Catalans de les pedres en fan pa' translates to 'the Catalans make bread from stones.' This straightforward expression signifies that the Catalan people can get themselves through any adversity imposed on them through sheer strength and unification. This is something that history has very clearly shown! 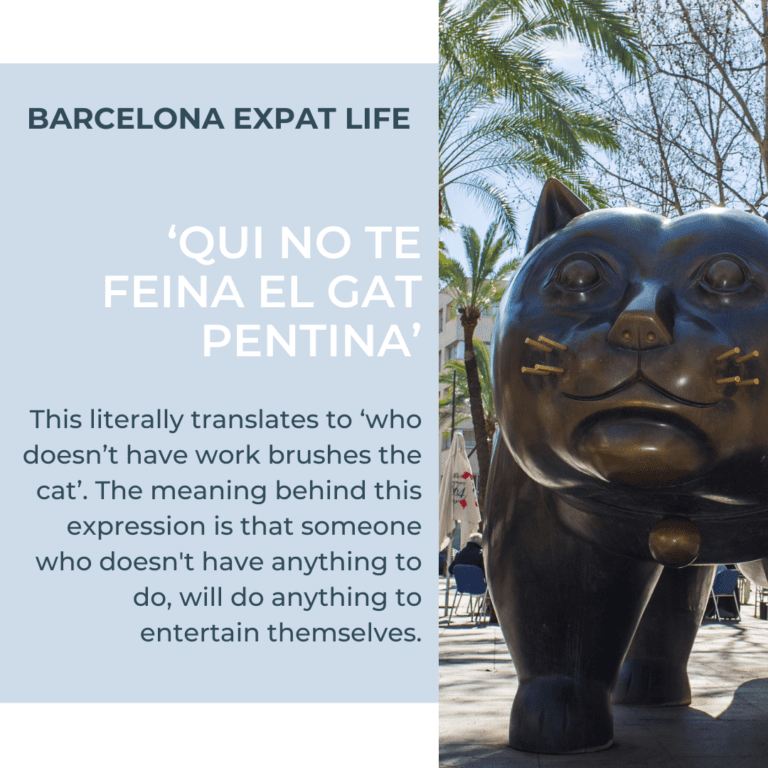